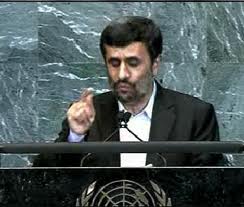 Dr. Katherine Albrecht, author of the best-selling book SPYCHIPS and host of a daily radio show, pointed out on a recent program that the United Nations has completely erased all traces of Iran President Mahmood Ahmadinejad's September 26, 2012 speech to the United Nations General Assembly.


Albrecht, who happened to be in New York City on business the day that Ahmadinjad gave his speech, was discussing related issues on her November 28th show and tried to post a link to the Iran President's speech in her archives. That is when she found that it had been inexplicably scrapped- memory holed- and no longer existed anywhere, except from reposts on a few obscure websites. The transcript of the speech had originally been posted on the U.N. site, but the links now result in a 'PAGE NOT FOUND' message.

Islamophobia // Burka // Media // Ahmadinejad //
Katherine discuss Islamaphobia raising its head in burka banning - without regard to the culture that wants and welcomes the burka. Why is the media lying to distort and fan up hatred? Katherine relates a conversation she had with a burka clad Syrian woman. Despite the media, Islam and Ahmadinejad do not hate the Jews - they just hate Israel's actions.

Audio of Dr. Albrecht's discussion on the matter can be heard here [Thurs., November 29th, Hour 1].

Ahmadinejad's speech can still be found on youtube, but Albrecht pointed out that if the U.N. along with Google, Inc. and other large media corporations decide to randomly censor historical speeches given at a taxpayer-funded organization simply because the speaker's views may be controversial, that does not bode well for freedom.

"The repeated claim that Iran wants to "wipe Israel off the map" is the lie of the century. Even Israel's Deputy Prime Minister Dan Meridor admitted earlier this year that Ahmadinejad never said Iran wanted to "wipe Israel off the face of the map". - the lie of the century That is well worth the time to read what he did say and how from there you can see that it is lied about on main stream TV and even horribly so from church pulpits. I saw that the other day when I was going through church programs and heard a well known minister telling that lie. It angered me so that if I were not 1,500 miles away from him I would be at his front door causing him to have me arrested so that I could speak the truth to his congregation and the general public. Looking between the lines of what is really going on with these accusations against Iran and Ahmadinejad, just take a look at scripture and see how the final world war is being brought to the world through Zionism, [synoguge of Satan], and its peon's USA/UK/France/Germany and others. Add to that list a long line of corporations that profit from conflict, destruction, and from there having the cost of rebuilding. Ah, I am one that sees this and find no one else that hears when I talk about these things. Therefore seeing there are billions that don't know, don't care and won't do anything to reverse this it they did, I see from that that we all are doomed because of inaction and watching this run its course.

First rule of debating: Interrupt your opponent and silence him, even if it means breaking all the rules! The US government and the Israelis are masters at this, and want the world to only hear one side of the argument... their side!