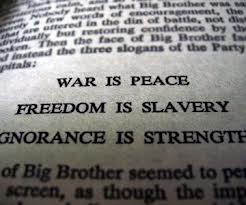 In the Western world truth no longer has any meaning. In its place stands agenda.

President George W. Bush’s first Treasury Secretary, Paul O’Neil, said that prior to 9/11 the first cabinet meeting was about the need to invade Iraq.

9/11 was initially blamed on Afghanistan, and the blame was later shifted to Iraq. Washington’s mobilization against Afghanistan was in place prior to 9/11. The George W. Bush regime’s invasion of Afghanistan (Operation Enduring Freedom) occurred on October 7, 2001, less than a month after 9/11. Every military person knows that it is not possible to have mobilization for invading a country half way around the world ready in three weeks.

The Orwellian “PATRIOT Act” is another example of planning prior to the event. This vast police state measure could not possibly have been written in the short time between 9/11 and its introduction in Congress. The bill was already written, sitting on the shelf waiting its opportunity. Why? Who wrote it? Why has there been no media investigation of the advanced preparation of this police state legislation?

Evidence that responses to an event were planned prior to what the government said was a surprise event does suggest that the event was engineered to drive an agenda that was already on the books.

Many on the left-wing are immune to evidence that is contrary to the official 9/11 story, because for them 9/11 is refreshing blow-back from the oppressed. That the oppressed struck back is more important to the left-wing than the facts.