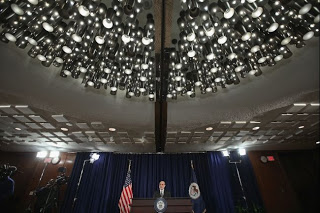 The jargon is no different in Brussels, London, Tokyo, Beijing or other places around the world where pinstriped policymakers congregate and pontificate. But sometimes even central bankers can be perfectly clear. They can also, apparently, be surprising.

Every Hot Tyranny Begins With the Disarming of the PEOPLE http://sgtreport.com/2012/12/every-hot-tyranny-begins-with-the-disarming-of-the-people/source: http://www.naturalnews.com/038485_gun_confiscation_political_cartoon_guns_are_bad.html

THE BANNING OF GUNS: The Violation of our 2nd Amendment (God-given Right) http://sgtreport.com/2012/12/the-banning-of-guns-the-violation-of-our-2nd-amendment/

As for 'AGW' or 'global warming' - ever hear of CLIMATEGATE?

"They" plan this stuff, decades in advance!  It's called DIRECTED HISTORY.


You see, there are "too many people" exhaling to much carbon dioxide, into the atmosphere (never mind all the industrial smokestacks, from the corporations that own Con-gress), and so, we need to reduce the global population, you know, down to say, 500 million, just so there are enough plebs, to continue to cater to US (the 1%), while we continue to live in the lap of luxury.  Unfortunately, there are these pesky, "middle-class" Americans, who actually believe all that stuff about the Bill of Rights, and the U.S. Constitution, etc.  WE HAVE TO GET RID OF THEM FIRST.  Once we do, then everyone around the planet will be a poverty-stricken PLEB (slave), catering to us.  So, we have to take away their guns first.  See how it works, folks.  It's called mind-control.

Anyone who doesn't know the answer to that question by now, is unfortunately, WAY BEHIND THE CURVE, at this point.

"War on Drugs" - FRAUD.  "War on Terror" - FRAUD.  'AGW' or 'global warming' - FRAUD.  (Look, the Central Bankers bankrolled the creation of the OSS/CIA.  The CIA runs the global drug trade, and the Central Bankers LAUNDER the profits in their off-shore facilities.  The Central Banker funded/created CIA in its turn, created 'Al-Qaeda', as the bogey-man du jour, and the excuse to topple non-compliant foreign governments, elected by the people, or not.  'Al-Qaeda' is also the excuse to "tighten security" here in the U.S., with the creation of brand new agencies, like Fatherland Security (DHS), and TSA, to further enslave Americans, while Obama can further enslave foreigners, or just eliminate them, via drone strikes,  while taking your guns away.  But, it all must be done, due to 'AGW', or 'global warming', or "gee-what-the-hell-will-they-call-it-next-CLIMATE-CHANGE?".  In the 1970's Scientists were warning that we were entering a new ICE AGE.  C'mon, folks.  The "Fiscal Cliff" - FRAUD.

But, don’t take MY word for it.

Gee, I wonder if the American Economic outlook for 2022 has anything to do with all those Americans “hoarding” silver and gold bullion? Here is Lou Dobbs, explaining it so well, so concisely, so SIMPLY – like only a logical, rational, thinking individual can:

One Bank Goes Apocalyptic: Inflation Is About To Explode...

Rabo: Is Someone Trying To Delay The Global COVID Recovery To Ram Through Even More Stimulus

Blain: Will The Agreement On Global Tax Ever Become A Reality?

"Shot Heard Around The World"

Boots on the Ground: I'm Back Home in Venezuela

The Geopolitics of Gold

The Geopolitics of Gold

Morgan Stanley: Here Are The 4 "Worries" That Will Dominate The Next 6-12 Months

Are You Ready For The Everything Shortage?