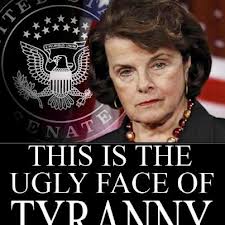 Dianne Feinstein: “If I could have gotten 51 votes in the Senate of the United States, for an outright ban, picking up [every gun]… Mr. and Mrs. America, turn ‘em all in.”
Senator Dianne Feinstein’s ultimate plan has always been to have Mr. and Mrs. America turn in their guns to the government, period. Feinstein’s bill would criminalize millions of Americans and completely eviscerate second amendment rights.

She tells us a gun ban is about saving the children and reducing crime, but her comments on 60 Minutes in 1995 reveal her true plan is to target law-abiding American gun owners.

On Thursday, Feinstein will introduced her dream bill to disarm the American people. The legislation is open-ended and includes provisions to re-register firearms and submit the fingerprints of law-abiding Americans as if they’re sex offenders.

Feinstein’s bill will also include a buy-back provision that will allow the government to confiscate all firearms. Both Feinstein and New York governor Andrew Cuomo have said that is their plan.

It is a gun confiscation bill.

Depopulation and Democide at Every Turn:

Can The Daily Wire Turn Nashville Into Hollywood for Conservatives?

Hundreds Of Thousands Of U.S. Homeowners Are Now Underwater On Their Mortgages-