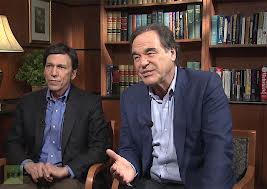 Americans are living in an Orwellian state argue Academy Award-winning director Oliver Stone and historian Peter Kuznick, as they sit down with RT to discuss US foreign policy and the Obama administration’s disregard for the rule of law.

­Both argue that Obama is a wolf in sheep’s clothing and that people have forgiven him a lot because of the “nightmare of the Bush presidency that preceded him.”

“He has taken all the Bush changes he basically put them into the establishment, he has codified them,” Stone told RT. “It is an Orwellian state. It might not be oppressive on the surface, but there is no place to hide. Some part of you is going to end up in the database somewhere.”

According to Kuznick, American citizens live in a fish tank where their government intercepts more than 1.7 billion messages a day. “That is email, telephone calls, other forms of communication.”

RT’s Abby Martin in the program Breaking the Set discusses the Showtime film series and book titled The Untold History of the United States co-authored by Oliver Stone and Peter Kuznick.