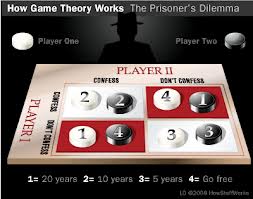 But there is a catch.
If both suspects stay silent, they both get off with a very light sentence. If they both turn on each other, they both get a longer sentence. And if only one of them rats out the other, the suspect who squeals goes free, while the one who stayed silent receives the worst sentence.

Naturally, the best choice is for both prisoners to stay silent– they both get off with a very light sentence.

But imagine that your accomplice is in there being interrogated. You know that he’s been offered the same deal… if he rats you out, he’ll go free while you take the heat. When it’s your turn, would you stay silent and risk a huge prison sentence while he walks?