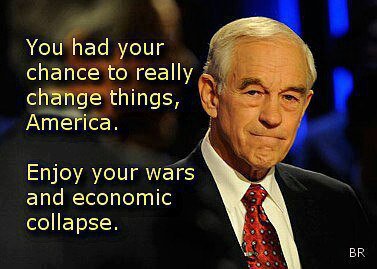 Despite claims that the Administration and Congress saved America from the fiscal cliff with an early morning vote today, the fact is that government spending has already pushed Americans over the cliff. Only serious reductions in federal spending will stop the cliff dive from ending in a crash landing, yet the events of this past month show that most elected officials remain committed to expanding the welfare-warfare state.
While there was much hand-wringing over the "draconian" cuts that would be imposed by sequestration, in fact sequestration does not cut spending at all. Under the sequestration plan, government spending will increase by 1.6 trillion over the next eight years. Congress calls this a cut because without sequestration spending will increase by 1.7 trillion over the same time frame. Either way it is an increase in spending.
Yet even these minuscule cuts in the "projected rate of spending" were too much for Washington politicians to bear. The last minute "deal" was the worst of both worlds: higher taxes on nearly all Americans now and a promise to revisit these modest reductions in spending growth two months down the road. We were here before, when in 2011 Republicans demanded these automatic modest decreases in government growth down the road in exchange for a massive increase in the debt ceiling. As the time drew closer, both parties clamored to avoid even these modest moves.
Make no mistake: the spending addiction is a bipartisan problem. It is generally believed that one party refuses to accept any reductions in military spending while the other party refuses to accept any serious reductions in domestic welfare programs. In fact, both parties support increases in both military and domestic welfare spending. The two parties may disagree on some details of what kind of military or domestic welfare spending they favor, but they do agree that they both need to increase. This is what is called "bipartisanship" in Washington.
While the media played up the drama of the down-to-the-wire negotiations, there was never any real chance that a deal would not be worked out. It was just drama. That is how Washington operates. As it happened, a small handful of Congressional and Administration leaders gathered in the dark of the night behind closed doors to hammer out a deal that would be shoved down the throats of Members whose constituents had been told repeatedly that the world would end if this miniscule decrease in the rate of government spending was allowed to go through.
While many on both sides express satisfaction that this deal only increases taxes on the "rich," most Americans will see more of their paycheck going to Washington because of the deal. The Tax Policy Center has estimated that 77 percent of Americans would see higher taxes because of the elimination of the payroll tax cut.
The arguments against the automatic "cuts" in military spending were particularly dishonest. Hawks on both sides warned of doom and gloom if, as the plan called for, the defense budget would have returned to 2007 levels of spending! Does anybody really believe that our defense spending was woefully inadequate just five years ago? And since 2007 we have been told that the wars in Iraq and Afghanistan are winding down. According to the Congressional Budget Office, over the next eight years military spending would increase 20 percent without the sequester and would increase 18 percent with the sequester. And this is what is called a dangerous reduction in defense spending?
Ironically, some of the members who are most vocal against tax increases and in favor of cuts to domestic spending are the biggest opponents of cutting a penny from the Pentagon budget. Over and over we were told of the hundreds of thousands of jobs that would be lost should military spending be returned to 2007 levels. Is it really healthy to think of our defense budget as a jobs program? Many of these allegedly free-market members sound more Keynesian than Paul Krugman when they praise the economic "stimulus" created by militarism.
As Chris Preble of the Cato Institute wrote recently, "It's easy to focus exclusively on the companies and individuals hurt by the cuts and forget that the taxed wealth that funded them is being employed elsewhere."
While Congress ultimately bears responsibility for deficit spending, we must never forget that the Federal Reserve is the chief enabler of deficit spending. Without a central bank eager to monetize the debt, Congress would be unable to fund the welfare-warfare state without imposing unacceptable levels of taxation on the American people. Of course, the Federal Reserve's policies do impose an "inflation" tax on the American people; however, since this tax is hidden Congress does not fear the same public backlash it would experience if it directly raised income taxes.

Green Reversal? Biden Screams At Oil Companies For NOT Drilling!

Respect the Fed? No, End the Fed