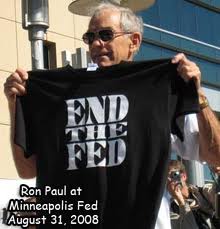 Congressman Paul's battles to audit and ultimately abolish the Federal Reserve Bank have been picked up by his former colleague Paul Broun of Georgia, who scored 92 percent on The New American's “Freedom Index” in the last Congress. “I applaud Congressman Paul’s efforts. He was fighting for liberty,” Broun told The Hill newspaper, which covers Congress from Washington, D.C. The story, entitled “Georgia's Broun keeps Ron Paul's anti-Fed mission alive in new Congress,” details how Broun — like former Congressman Paul, a medical doctor — has continued the anti-Fed mantra of Ron Paul. “My plan is to pick up right where Congressman Paul left off,” Broun said on his congressional website, “I’m just going to stand on his shoulders and go forward in that same fight.”

Audit the Fed Introduced in Congress