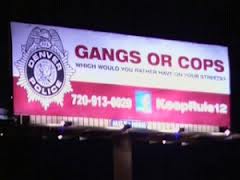 Denver Police Officer Eric Sellers once choked an innocent pedestrian into unconsciousness while two other officers refused to intervene. This was an act of summary “street justice” imposed as a penalty for “contempt of cop”: The victim, a volunteer fire fighter named Jared Lunn, had been assaulted at a nearby club and had told Sellers that he wanted to press charges. When Sellers dismissively told Lunn to go home, the 21-year-old disgustedly muttered “Way to ‘protect and serve.’” Such impudence on the part of a Mundane simply can’t be tolerated.

A few weeks later, Sellers attacked a young man named John Crespin because the officer thought the kid acted “nosy.” Without cause or warrant, Sellers pulled up into the driveway of Sellers’ home and ordered him out of his car. When Crespin complied, his shoulder brushed lightly against the officer’s arm – an incidental contact that left Sellers feeling defiled.

So the officer seized the young man in a chokehold and spit a stream of obscenities in his face. After handcuffing Crespin, Sellers used his police baton to lift the young man a couple of feet from the ground, then dropped him face-first into the driveway. He then brutally beat him into a bloody, lumpy mess before charging him with “felony menacing.”

In March 2008, a disabled Iraq veteran named James Moore was nearly beaten to death on the sidewalk outside his apartment by a thugscrum of Denver officers. After being hog-tied, choked, and pummeled, Moore briefly flat-lined while he was being treated by EMTs.

The lead assailant was Officer Shawn Miller. Two days earlier, Miller and his partner severely beat a pedestrian named Jason Graber, leaving him with a broken knee and a permanent disability. Graber, alarmed over Miller’s reckless driving, had gesture for the officer to slow down. That prompted Miller to stop and treat the uppity Mundane to a dose of law and order.

3 Comments in Response to Gangs or Cops – Or Do I Repeat Myself?

Here's the link to the article source: Gangs or Cops – Or Do I Repeat Myself?

If there were just a few bad-apple cops they would be easily fired. The whole barrel is rotten save for a few.

Surveillance goes both ways. Cell phone cameras are just the beginning. Spy-glasses cameras. Small cameras the size of a pen that record audio and video. And getting smaller and better quality.

If cops have noting to hide every interaction they have should be audio video recorded. Mandatory, similar to dash board cameras except these are part of their uniform. If an interaction isn't recorded and there is a complaint of police abuse it is presumed that the cop(s) did something malicious and/or had nefarious intent.

The world is waking up and the bad guys know it. The powers that were want a civil war because initiation of force/violence and threat of violence is their SOP. They know this. Government is not voluntary interaction, it's force.

There are those who just want to be left alone and those that wont leave them alone.

The shoe is swiftly becoming on the other foot. They are coming under increasing surveillance. No matter how much they want to be left alone to hide their violence and nefarious intents, we will not leave them alone. Rather, we will increasingly expose their actions which speak volumes. Then maybe the few good cops can clean house.