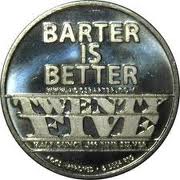 Euros discarded as impoverished Greeks resort to bartering ... Communities set up local currencies and exchange networks in attempt to beat the economic crisis ... It's been a busy day at the market in downtown Volos. Angeliki Ioanitou has sold a decent quantity of olive oil and soap, while her friend Maria has done good business with her fresh pies. But not a single euro has changed hands – none of the customers on this drizzly Saturday morning has bothered carrying money at all. For many, browsing through the racks of second-hand clothes, electrical appliances and homemade jams, the need to survive means money has been usurped. "It's all about exchange and solidarity, helping one another out in these very hard times," enthused Ioanitou, her hair tucked under a floppy felt cap. "You could say a lot of us have dreams of a utopia without the euro." – UK Telegraph

Free-Market Analysis: This article posted by the UK Telegraph deals with the emergence of alternative money in a stressed Greek society. What's an alternative dominant social theme? That people will take action, however ineffective, when they have no other options. A subdominant social theme might be "no gold or silver needed."

That's right, the article manages the feat of portraying a society turning to alternative money without ever dwelling on gold or silver ... especially silver. What the article DOES clumsily portray is the emergence of various kinds of alternative monies in lieu of the euro itself.

The feedbacks are at least twice as sophisticated as the article and point out that the reporting is as much about an alternative currency as it is about bartering. Here's some more from the article:

In this bustling port city at the foot of Mount Pelion, in the heart of Greece's most fertile plain, locals have come up with a novel way of dealing with austerity – adopting their own alternative currency, known as the Tem. As the country struggles with its worst crisis in modern times, with Greeks losing up to 40% of their disposable income as a result of policies imposed in exchange for international aid, the system has been a huge success. Organisers say some 1,300 people have signed up to the informal bartering network.