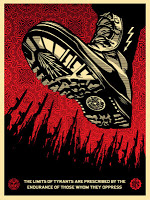 We have chosen to highlight United States agencies; however, this top 10 list has global impact, as the U.S. has now proven to be the enforcement division of the overarching globalist agenda of centralized control.

One could argue that every government agency serves the purpose of stifling freedom and wasting taxpayer money. Yet, the 10 listed below go the extra mile for their sheer corruption, draconian regulations, and ultimate impact upon the largest number of citizens.

The main criteria for inclusion in the top 10 is the amount of money spent by the taxpayer according to official budget declarations, and then attaining the highest level of doing exactly the opposite of their stated intentions.

Here is the countdown to the top 10 most dangerous U.S. government agencies to the freedom, prosperity and health of its citizens . . . .

#10 - Environmental Protection Agency (EPA) - annual budget $8.5 billion: Their record of ignoring environmental damage and the health effects on humans from major events such as 9/11, the Exxon and Gulf oil spills to the worst case, Fukushima, is unparalleled. Rather than investigate and warn of real dangers, they have gone after farmers for dubious claims of water contamination, while treating milk spills as they should have treated oil spills.  Even worse, the EPA has concluded that there is no law preventing it from doing "research" on Americans. A recent lawsuit over the EPA's work with airborne pollutants will put this claim to the test in Federal court. Their illegal human experiments could break the Nuremberg Code (source: The Washington Times).


#9 - Internal Revenue Service (IRS) - annual budget $13.3 billion:  Cries of "End the Fed!" continue to get louder, while more people are beginning to wake up completely and couple this with "End the IRS!" In fact, the two were developed together 100 years ago making the private Fed and the government IRS fraternal twins in creating a system of indentured servitude through dollar devaluation and arbitrary tax collection, respectively. The Fed enslaves through stealth, while the IRS uses force to impose itself through ever-expanding regulations and the threat of fines and imprisonment. As the collection division, the IRS rakes in a staggering $2.3 trillion annually. Despite that massive amount, the IRS has a distinguished record of ignoring the shenanigans of major corporations and federal employees, while focusing harshly on the average private citizen and small businesses in particular. Thankfully, there is some momentum toward abolishing the IRS through FairTax legislation. Now would be a good time, as the IRS will be empowered even further when the healthcare overhaul takes effect.

What's So Great About Democracy?