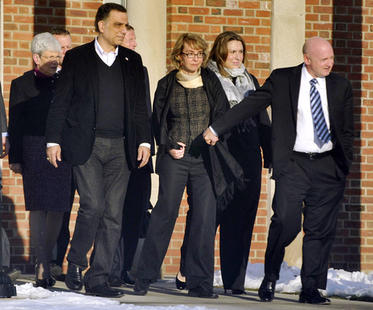 TUCSON, Ariz. — Former Rep. Gabrielle Giffords and her husband launched a political action committee aimed at curbing gun violence on Tuesday as her Arizona hometown paused to mark the second anniversary of a deadly shooting rampage that left her with severe injuries.

Tucson residents rang bells at 10:11 a.m. — the moment a mentally ill gunman opened fire on Giffords as she met with constituents in 2011, killing six people and leaving 12 others injured. Mayor Jonathan Rothschild rang a bell at a fire station 19 times — one for each victim.

At the same time, two politicians on opposite ends of the gun debate held dueling weapons buy-backs outside a police station. Such events have been held around the country since the shooting at a Connecticut school that revived the gun control debate.

City Councilman Steve Kozachik asked people to turn in their guns for a $50 gift certificate from Safeway — the grocery store chain that owned the supermarket that was the site of the shooting. He wants to get guns out of people's home and bring pressure on politicians to change gun laws.

About 200 firearms, many of them old, some inoperable, were turned in during the event, Tucson police said. They were set to be destroyed later in the day. Kozachik said he handed out about $10,000 worth of grocery gift certificates.

"We inherited the guns, and we had no use for them," said Jason Munday, who traded in two old rifles. "Figured we'd just get them out of the house."

In response to the event, a Republican outgoing state senator organized a gathering outside the same station where about a dozen people offered cash for guns. Several people waved signs and held up money to approaching drivers to announce that they would buy their weapons.

Maybe she can get started by taking the guns from the Illegals she wants to fill our country with.