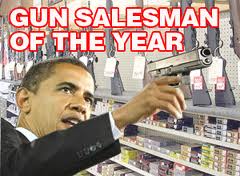 "The president is going to act," said Biden, giving some comments to the press before a meeting with victims of gun violence. "There are executive orders, there's executive action that can be taken. We haven't decided what that is yet. But we're compiling it all with the help of the attorney general and the rest of the cabinet members as well as legislative action that we believe is required."

Biden talked also about taking responsible action. "As the president said, if your actions result in only saving one life, they're worth taking. But I'm convinced we can affect the well-being of millions of Americans and take thousands of people out of harm's way if we act responsibly."

'The Government Has Destroyed Medicine' - With Special Guest Del Bigtree

Democrats Attack Lake as 'Extremist.' 2024 Republicans Flock to Her

Are we decoupling from rates?

Russia Warns Of A "Direct Military Clash" With The U.S.

Why the Heck Is There a Chinese Police Station in NEW YORK?