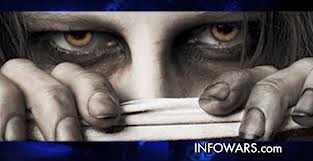 Max Brooks’ “World War Z: An Oral History of the Zombie War” describes a decimated, dystopic world, and a leadership whose only solution is to round people up and put them to work in forced labor camps.

The book is a globalist’s love letter to worldwide genocide against nation-states and individuals, ultimately yielding UN global rule, thanks to the zombies.

Far from the individualist storyline of The Walking Dead series, survivors in World War Z are rounded up into compact cities protected by UN militants and forced to carry out Marxist labor for the good of the group.

Anyone who owns firearms not in service by the UN is demonized and cast out of the group. Those too smart or too rebelious, or who are simply seen as not fit for future society, are used as bait for the zombies.

Although many will view the movie as just another cool, sci-fi zombie flick, the message embedded throughout the pro-genocide, anti-human publication should be fairly obvious. It is geared towards conditioning the public that humanity is ugly and needs to be exterminated.

Top Gun: Maverick - The HIDDEN Truth THAT NOBODY'S TALKING ABOUT!!!!"

What's So Great About Democracy?