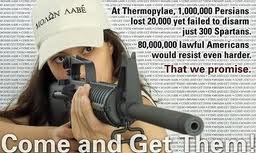 * A Feinstein-like semi-auto ban which, according to experts who have done the counting, could ban up to 50% of all long guns currently in circulation and up to 80% of all handguns. Incidentally, if you wanted to keep the AR-15 you currently have, you would have to have a 6-month FBI background check, be fingerprinted, and get a machine gun-type license.

* The framework for national gun registration and confiscation by requiring every gun transaction to have a Brady Check.

* Supposed “toughening” of anti-gun trafficking measures, but without doing anything about the man responsible for allowing more gun trafficking than any other American -- Attorney General Eric Holder (with his Fast and Furious program).

Let us backtrack and explain a couple of things: Increasingly ATF is going into gun dealers and xeroxing all of the 4473’s. This is illegal under McClure-Volkmer, but, in case you hadn’t noticed, Obama is increasingly ignoring the law when it inconveniences him. Thus, if every gun transaction in America must have a Brady Check, every gun in America could presumably be fed into a national registration system by ATF by simply copying the 4473’s.

New York Governor Andrew Cuomo -– a man who gives you a pretty good idea of where gun control is going -– said, on the front page of the New York Times, that “confiscation” of firearms is an option. Obviously, having a registration list makes such a task much easier.

But what about so-called large-capacity magazines? Well, Republicans like Georgia’s Phil Gingrey have talked about the possibility of banning them. However, there are many problems with this.

First of all, millions of gun owners own these magazines for defensive purposes. To take away a homeowner’s right to choose these devices will simply make honest citizens less safe -- especially, when they are facing multiple attackers.

Moreover, police have sometimes had to fire 20-30 rounds to finally stop just one drug-crazed individual from shooting. This just underscores why, quite often, good guys will need more than just six-shooters.

Second, there are tens of millions of high-capacity magazines in circulation. What are you going to do about them?

Third, changing magazines (or switching guns) is not a big deal for people like Adam Lanza.

Fourth -- and perhaps most important –- this is a game the anti-gun zealots have played before: They threaten to kill the Second Amendment, and then negotiate their way back to “merely” eviscerating it.

Or put another way, they threaten to shoot us in the head to get us to agree to cutting off our fingers.

The only way that America’s gun owners are going to have peace over the next decade is to stop ALL gun control -– as we did after Columbine –- and then defeat compromising legislators running for reelection in 2014.

ACTION: Contact your Senators and Congressmen. Demand that they oppose ALL gun control -- including magazine limitations and universal background (registration) checks -- being proposed by the Biden commission.