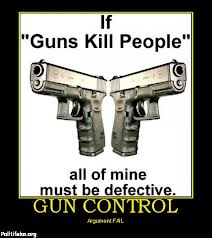 Silence rarely conveys knowledge, especially when it’s the result of intimidation. There are moments when it’s prudent to remain silent, but hardly when you’re in the midst of a gun ownership debate. The political class, and its anti-gun proponents, are today engaged in a massive legal assault on citizen gun ownership through regulation and/or abolition. Their arguments are well-known and much has been written on the subject, both in favor and in opposition to the idea.

Unfortunately, silence due to "political correctness" is hampering a frank and honest discussion of the fundamental issue of citizen gun ownership. While gun ownership for personal protection or sporting uses are being heatedly defended, these are only secondary considerations to the more critical concern over citizen ownership of guns. The preeminent and fundamental case for gun ownership by citizens is to secure and preserve the means for individuals to safeguard their lives and property from a potentially threatening oppressive government.

Of course this tends to sound paranoid, for after all, most citizens today view our government as a responsive political institution, primarily engaged in helping its citizens to secure a better quality of life. Such common sentiments about one’s government are not new. Even the Germans shared such a view of their own government at the beginning of the 20th century. So, to express concerns today that our politicians and bureaucrats could someday turn against their own citizens and inflict violent harm upon them is harshly condemned by many as being ludicrous.

After all, many politicians and anti-gun proponents today are convinced no democratic government could ever become so oppressive and dictatorial, certainly not our own. But what we believe and what may prove true are not always the same. We know the face of the future is forever veiled by the hand of God and none of us can ever know with certainty where we’re headed. But acquiring an understanding of the past is another matter, and we’d all be wise to heed it. Too often the past is prologue to the future so it’s always prudent to remind ourselves of Edmund Burke’s famous line, "Those who cannot remember the past are condemned to repeat it." And it’s equally important to remind ourselves that the essence of government is a sovereign power with a monopoly over initiating force upon others, a coercive power which has become deadly and violent many times throughout the ages.

For anti-gun proponents to ignore the ravages of 20th century history and believe today’s citizens should be denied the means to protect themselves from the risk of future oppressive tyranny is both dangerous and foolhardy. Have we forgotten how Germany, Russia, and China disarmed their citizens in the 20th century, and shortly thereafter their governments slaughtered tens of millions of their own citizens? Have we forgotten the "killing fields" of Cambodia where disarmed citizens were slaughtered close to annihilation in the 1970’s by their own government? Those slaughtered were the helpless victims of their well-intentioned citizen ancestors who acquiesced to government mandated gun control.