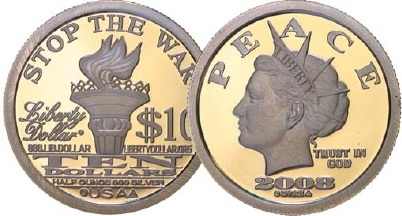 At the request of the U.S. Secret Service, eBay has begun purging the online auction site of listings offering for sale Liberty Dollar medallions in gold, silver, platinum and copper.

Officials at eBay indicate the systematic removal beginning Nov. 29 of the listings is intended to conform with its policy implemented Feb. 20 banning the listing of counterfeits and replicas on eBay.com.

In emails sent by eBay to sellers whose listings for Liberty Dollars were canceled, officials at the online auction site expressed their regrets for having to take the action.

“The United States Secret Service has requested the removal of all Norfed Liberty dollars on the eBay site as counterfeits. ...

“Please do not relist this item(s).

“We appreciate that you chose to list this coin on our site and understand there was no ill intent on your part. Your listing fees have been credited to your account.”

Contacted by Coin World, eBay spokesman Ryan Moore offered the following comment: “The listings for Norfed Liberty Dollars have been removed as they have been deemed counterfeit by the United States Secret Service. Counterfeits are illegal and not welcome on any of eBay’s sites.”

NORFED is more formally known as the National Organization for the Repeal of the Federal Reserve Act and the Internal Revenue Code. The group issued Liberty Dollar medallions as an alternative to Federal Reserve notes, and advocated their commercial use.

Dave Gillie, who began buying and selling Liberty Dollars in 2001 and later became a regional currency officer for NORFED, said Dec. 5 that he had eight of his listings for Liberty Dollars canceled on Nov. 29.

The dealer was perplexed by the government’s characterization of Liberty Dollars as counterfeits. Gillie said in a Dec. 5 email to Coin World that out of respect for eBay’s “coerced” decision he will not list Liberty Dollars for sale at the website until “they change their policy again.”

I think it's time to boycott eBay.

The time of Visa and MasterCard has passed, now is the time when the Trump Card will rise!

Peter Schiff: Why Shouldn't You Give Up On Gold And Silver?

A New Gold Standard? Kremlin Confirms Intention To Back Ruble With Gold And Commodities