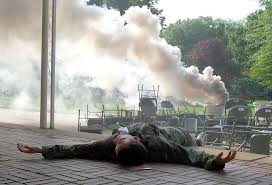 The Syrian military used an exotic chemical weapon on rebels during an attack in the city of Homs, some U.S. diplomats now believe.

That conclusion — first reported by Foreign Policy’s Josh Rogin and laid out in a secret cable from the U.S. consul general in Istanbul — contradicts preliminary estimates made by American officials in the hours after the December 23 strike. But after interviews with Syrian activists, doctors, and defectors, American diplomats in Turkey have apparently rendered a different verdict. It’s important to note, however, that this was the conclusion of a single consulate within the State Department, and there is still wide disagreement within the U.S. government over whether the Homs attack should be characterized as a chemical weapons incident.

“We can’t definitely say 100 percent, but Syrian contacts made a compelling case that Agent 15 was used in Homs on Dec. 23,” an unnamed U.S. official tells Rogin.

Agent 15 is similar to 3-quinuclidinyl benzilate or BZ, a powerful hallucinogen that the American military tested out on its own soldiers during the Cold War. Its emergence on the Syrian battlefield would be nothing short of bizarre. While Syria is well-known to have a massive supply of chemical weapons, international observers haven’t ordinarily included BZ on that list.

Over the years, there have been rumors of BZ being used on a battlefield — including one that Iraqi insurgents were dosing themselves with the drug to pump up their aggressiveness. If the cable is accurate, this would be the first confirmed case of BZ employed as a weapon. At the moment, however, the cable’s claims are not confirmed.

“The reporting we have seen from media sources regarding alleged chemical weapons incidents in Syria has not been consistent with what we believe to be true about the Syrian chemical weapons program,” White House national security council spokesman Tommy Vietor said in a statement. “If the Assad regime makes the tragic mistake of using chemical weapons, or fails to meet its obligation to secure them, the regime will be held accountable.”

President Obama has called the use of chemical arms in Syria a “red line” that could trigger outside intervention in the civil war that has killed more than 60,000 people. It’s unclear whether the White House would consider a BZ strike to be a step over that line; Agent 15 isn’t nearly as deadly as a nerve agent like sarin. Last week, America’s top military officer said preventing a chemical attack by the Assad regime would be “almost unachievable.”

American and allied intelligence services have been watching the Syrian government’s acquisition and possible use of chemical weapon components for years. They’ve blocked the importation of precursor chemicals and equipment into Syria when they’ve been able, and immediately reported to the White House when the Syrian military began mixing those precursor chemicals and loading them into munitions for a possible attack.

But when U.S. officials first caught wind of Syrian rebels’ chemical weapons claim, the officials didn’t make much of it. In graphic videos uploaded to YouTube, opposition activists said they were hit by a gas that was “something similar to sarin,” a deadly nerve agent. The videos showed victims howling in agony and barely able to breathe. But the symptoms, as gruesome as they were, didn’t seem like the one produced by sarin.

There were complaints of strong smells in the videos; sarin is often odorless. There were reports that the victims inhaled large amounts of the chemical; a minuscule of amount of inhaled sarin can be fatal.

“It just doesn’t jibe with chemical weapons,” one U.S. official told Danger Room at the time.

Later accounts from Homs more closely match what one might expect from a nerve gas victim. Rogin spoke with Dr. Nashwan Abu Abdo, a neurologist from Homs, who talked about victims with pinpoint pupils, “choking on their own secretions.”

Abdo’s descriptions, however, don’t correspond with the conclusions of the State Department cable. A hallucinogen like BZ is unlikely to produce the effects Abdo outlined; such drugs typically cause pupils to grow, for instance, not contract.

Something horrible happened in Homs on December 23. Exactly what that horrible event was still isn’t clear.