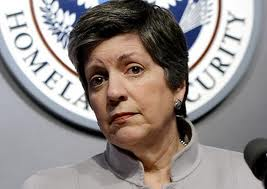 Janet Napolitano, head of the Department of Homeland Security, released a statement Wednesday saying she is "proud to support" the Obama administration's efforts to "combat gun violence in our country." Here's more from Napolitano's statement:
In the aftermath of the tragic Newtown shooting, the Department of Homeland Security (DHS), together with the Department of Justice (DOJ), and the FBI have worked to identify measures that could be taken to reduce the risk of mass casualty shootings. In the coming days, DHS will expand and formalize coordination of ongoing efforts intended to prevent future mass casualty shootings, improve preparedness, and to strengthen security and resilience in schools and other potential targets. DHS will work with partners at all levels of government, to address five critical areas intended to reduce the risk of mass casualty shootings in the United States: Prevention, Protection, Response, Education, and Research/Evaluation. DHS will also work with law enforcement to refresh, expand and prioritize the implementation of nationwide public awareness efforts such as the “If You See Something, Say Something™” campaign. This is a critical issue that requires immediate attention and I look forward to supporting the President and this Administration as we move ahead.