Can YOU spot the deepfake from the real person?
Be a Reporter
Letters To The Editor
Tutorials
Advertise
More News / Page 2 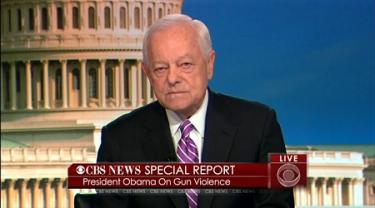 Bob Schieffer somehow topped Chris Matthews during CBS News's special coverage of President Obama's gun control press conference on Wednesday, as he became the worst caricature of a foaming-at-the-mouth cheerleader for the chief executive. Schieffer lauded "one of the best speeches I've ever heard him [Obama] deliver", and compared Obama's new gun control agenda to Lyndon Johnson's push for civil rights legislation in the 1960s.

BOB SCHIEFFER: ...Let's remember: there was considerable opposition when Lyndon Johnson went to the Congress and...presented some of the most comprehensive civil rights legislation in the history of this country. Most people told him he couldn't get it done, but he figured out a way to do it. And that's what Barack Obama is going to have to do...what happened in Newtown was probably the worst day in this country's history since 9/11. We found Osama bin Laden. We tracked him down. We changed the way that we dealt with that problem. Surely, finding Osama bin Laden; surely, passing civil rights legislation, as Lyndon Johnson was able to do; and before that, surely, defeating the Nazis, was a much more formidable task than taking on the gun lobby.

1 Comments in Response to Bob Schieffer Likens Obama 'Taking on the Gun Lobby' to Hunt for Bin Laden, 'Defeating t

It is a bitch to get old.

The Dangers of Licensing