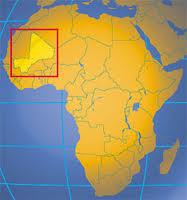 Confused over the surging violence in Mali and now Algeria? Trying to find Mali on the map?

War, as the great Roman historian Tacitus wrote, teaches geography. This week’s new lesson is West and North Africa, not so long ago colonial possessions of France.

Big irony: the US claimed its energy sources were threatened by instability in the Arab world. So it began exploiting West Africa as a "secure" alternative.

Western governments and media have done the public a major disservice by trumpeting warnings of an "Islamist threat" in Mali. It’s as if Osama bin Laden has popped up on the Niger River. Our newest crisis in Africa is not driven primarily by religion but by a spreading uprising against profoundly corrupt, western-backed oligarchic governments and endemic poverty.

Mali’s troubles began last year when it shaky government was overthrown. Meanwhile, heavily-armed nomadic Tuareg tribesmen, who had served Libya’s late Col. Gadaffi as mercenaries until he was overthrown by French and US intervention, poured back into their homeland in Mali’s north. A major unexpected consequence. Fierce Tuareg warriors, who battled French colonial rule for over a century, were fighting for an independent homeland, known as Azawad.