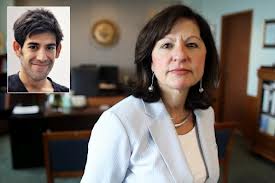 Whenever an avoidable tragedy occurs, it's common for there to be an intense spate of anger in its immediate aftermath which quickly dissipates as people move on to the next outrage. That's a key dynamic that enables people in positions of authority to evade consequences for their bad acts. But as more facts emerge regarding the conduct of the federal prosecutors in the case of Aaron Swartz – Massachusetts' US attorney Carmen Ortiz and assistant US attorney Stephen Heymann – the opposite seems to be taking place: there is greater and greater momentum for real investigations, accountability and reform. It is urgent that this opportunity not be squandered, that this interest be sustained.

The Wall Street Journal reported this week that – two days before the 26-year-old activist killed himself on Friday – federal prosecutors again rejected a plea bargain offer from Swartz's lawyers that would have kept him out of prison. They instead demanded that he "would need to plead guilty to every count" and made clear that "the government would insist on prison time". That made a trial on all 15 felony counts – with the threat of a lengthy prison sentence if convicted – a virtual inevitability.

Just three months ago, Ortiz's office, as TechDirt reported, severely escalated the already-excessive four-felony-count indictment by adding nine new felony counts, each of which "carrie[d] the possibility of a fine and imprisonment of up to 10-20 years per felony", meaning "the sentence could conceivably total 50+ years and [a] fine in the area of $4 million." That meant, as Think Progress documented, that Swartz faced "a more severe prison term than killers, slave dealers and bank robbers".

Swartz's girlfriend, Taren Stinebrickner-Kauffman, told the WSJ that the case had drained all of his money and he could not afford to pay for a trial. At Swartz's funeral in Chicago on Tuesday, his father flatly stated that his son "was killed by the government".

Ortiz and Heymann continue to refuse to speak publicly about what they did in this case – at least officially. Yesterday, Ortiz's husband, IBM Corp executive Thomas J. Dolan, took to Twitter and – without identifying himself as the US Attorney's husband – defended the prosecutors' actions in response to prominent critics, and even harshly criticized the Swartz family for assigning blame to prosecutors: "Truly incredible in their own son's obit they blame others for his death", Ortiz's husband wrote. Once Dolan's identity was discovered, he received assertive criticism and then sheepishly deleted his Twitter account.