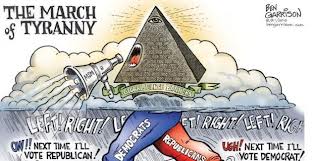 Republicans and conservative Americans are still fighting Big Government in its welfare state form. Apparently, they have never heard of the militarized police state form of Big Government, or, if they have, they are comfortable with it and have no objection.

Republicans, including those in the House and Senate, are content for big government to initiate wars without a declaration of war or even Congress’ assent, and to murder with drones citizens of countries with which Washington is not at war. Republicans do not mind that federal “security” agencies spy on American citizens without warrants and record every email, Internet site visited, Facebook posting, cell phone call, and credit card purchase. Republicans in Congress even voted to fund the massive structure in Utah in which this information is stored.

But heaven forbid that big government should do anything for a poor person.

Conservatives accuse liberals of the “institutionalization of compassion.” Writing in the February, 2013, issue of Chronicles, John C. Seiler, Jr., damns Johnson’s Great Society as “a major force in turning a country that still enjoyed a modicum of republican liberty into the centralized, bureaucratized, degenerate, and bankrupt state we endure today.”

It doesn’t occur to conservatives that in Europe democracy, liberty, welfare, rich people, and national health services all coexist, but that somehow American liberty is so fragile that it is overturned by a limited health program only available to the elderly.