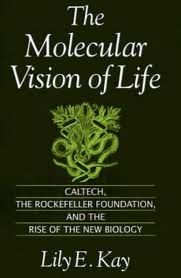 A Review of Lily E. Kay's The Molecular Vision of Life: Caltech, The Rockefeller Foundation, and the Rise of the New Biology (Oxford University Press, 1993)

Is the molecular biology we have inherited from the twentieth century merely a product of the scientific method, an inevitable set of conclusions spawned by the cumulative impartial deduction of theoretical principles from objective observations? Or was it molded, shaped, and directed by an elite establishment that had aims much broader than the pursuit of science?

In her 1993 book The Molecular Vision of Life, Dr. Lily E. Kay, whom a 2001 MIT News Office obituary referred to as "one of the outstanding historians of biology of her generation," argued that the "new biology" was largely created by the Rockefeller Foundation and its subsidiary program at the California Institute of Technology (Caltech) through a consensus between a scientific elite and a business elite whose broader aims centered on eugenics and the need to create a mechanism of social control and human engineering:

The new science did not just evolve by natural selection of randomly distributed disciplinary variants, nor did it ascend solely through the compelling power of its ideas and its leaders. Rather, the rise of the new biology was an expresion of the systematic cooperative efforts of America's scientific establishment -- scientists and their patrons -- to direct the study of animate phenomena along selected paths toward a shared vision of science and society.

The term "molecular biology," in fact, was coined in 1938 by Warren Weaver, director of the Rokcefeller's natural sciences division, to rename for the third time the program originally known as "pscyhobiology," the aim of which was "the rationalization of human behavior."

The model Kay uses to describe this historical process is one of "consensus" that does not necessarily require the active complicity of all scientists. Many of them did not share the goals of eugenics, social control, or human engineering. Many of them, even at the elite level, were interested in the pursuit of "pure science," even though they were certainly aware of the goals of the business and administrative elites within the Rockefeller Foundation. Scientists and Foundation elites needed each other, however, and the end result was that the "new biology" would not be an open-ended investigation of "the riddle of life" but would rather be a directed investigation to answer specific questions in ways amenable to the goals of eugenics and social control.

The Rockefeller Foundation, founded in 1913, poured $25 million dollars of support into the molecular biology program of the United States between the years 1932 and 1959. The extent of its influence during this intensive period, however, went far beyond simple funding. The Foundation's molecular biology program permeated the academic infrastructures of all of the critical institutions, with Rockefeller trustees holding top administrative positions in universities. Officers of the foundation created an informal yet de facto peer review system, with scientific advisors providing them detailed knowledge of academic traffic and scientists and administrators consulting their judgment on academic appointments, reputations, personalities, travel, and potential projects. Warren Weaver, director of the Foundation's Natural Sciences Division, was often invited to sit in on faculty meetings.

World War I ushered in a new political and economic ideology of "cooperation" that departed from nineteenth century individualism and stressed interdisciplinary projects, "team players," and coordinating managers. The Rockfeller Foundation stepped in during this reorganization of science and played a critical role in shaping it.

The Foundation supported molecular biology projects at many institutions, but it invested the largest sums of money in six: the University of Chicago, the California Institute of Technology (Caltech), Standford, Columbia, Harvard, and the University of Wisconsin. Ultimately, Caltech became the most important center of the new biology. Because it lacked a medical program and an agricultural mandate, molecular biology was free to thrive there as a new, independent discipline. Caltech swiftly adopted the interdisciplinary model borrowed from post-War corporate culture, and along with the University of Chicago it garnered vast sums of money from the Rockefeller Foundation.

Caltech produced many of the "founding fathers" of molecular biology. These include Thomas Hunt Morgan, Max Delbruck, George Beadle, and Linus Pauling. James D. Watson, who with Francis Crick discovered the structure of DNA at Oxford, was a disciple of Delbruck; his investigations with Crick were largely based on Pauling's paradigm of molecular structures, and he later joined Caltech.

In the dozen years following the elucidation of the structure of DNA in 1953, 17 of 18 scientists awarded Nobel prizes for research into molecular biology were fully or partially funded by the Rockefeller Foundation under Warren Weaver's guidance.