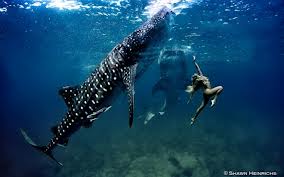 But while the levels and colors have been manipulated and the backgrounds tweaked, the most striking part – the models’ proximity to sharks – is real.

While a bit whimsical, the photos have recently gone viral and lead to a new awareness of the whale shark, which was Schmidt and Heinrichs’ plan all along.

“I’ve been doing underwater filming and photography work since the late 90s and one of the things I’ve come to realize is that there are niche communities of people who are interested in the ocean,” says Heinrichs. “It’s a very small subset of the global population. The whole concept of this shoot was to really break out of that box.”

The Dangers of Licensing