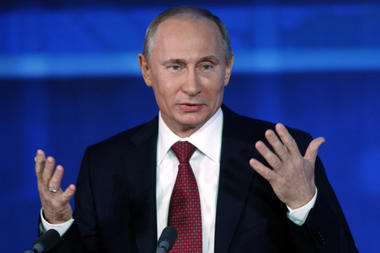 Both Vladimir Putin and his foreign minister have lashed out at the West in recent days for pursuing what they regard as naive and incoherent Middle East policies.
The critique targets Western backing of anti-dictator rebellions in Libya and Syria, which, as Mr. Putin tells it, only fuels the spreading flames of extreme Islamist insurrection, including the current war in Mali and last week's terrorist strike on a gas complex in Algeria.

"The Syrian conflict has been raging for almost two years now. Upheaval in Libya, accompanied by the uncontrolled spread of weapons, contributed to the deterioration of the situation in Mali," Mr. Putin said at a meeting with new ambassadors in the Kremlin Thursday.