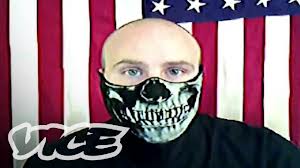 Traveling from tea parties in Texas to "Oath Keeper" rallies in Massachusetts, VICE investigates whether the country is actually on the verge of the 2nd Revolutionary War.
--
The Department of Homeland Security classifies them as potential "domestic terrorists"; they prefer to be called patriots. As the economic crisis deepens, a growing movement of Americans is rejecting the two-party system and the mainstream media. They believe a violent revolution is imminent, and they're getting ready for it now. VICE correspondent Ryan Duffy crosses the country to meet the people on the front lines of the struggle. They include Alex Jones, a radio talk show host in Austin, Texas who is waking people up to the dangers of the corporate globalists — and has seen traffic on his websites increase dramatically in recent months. We also meet Sgt. Charles Dyer, a U.S. Marine stationed at Camp Pendleton who has taken an oath to disobey unconstitutional orders and take up arms against the government if it becomes tyrannical — and is training a citizen militia to do the same.

Originally released in 2010 on http://VICE.com

Check out the Best of VICE here: http://bit.ly/VICE-Best-Of

I think it would be a very good idea for the Oath Keepers to stand near the recruiters with some truths the recruiters forgot to tell.Also! I think the Oath Keepers should invite Janet,both of them! to an oath keeper meeting so that she can call them terrorist to their face.They should also challenge those in the military that are willing to Kill Americans to see if they have the nerve to stand before the American they are willing to Kill,and tell them Yes! I will Kill You if told to,and have them bring their families with them.All the pilots that are willing to drop bombs on Americans to Kill Them,and ask them to bring their parents,and children along,and John Kerry...the Hero.

Congressman Calls For Investigation Of 2020 Riots

"Night Of Rage" Flyers Spotted In DC Ahead Of Roe v. Wade Decision

BANK RUNS IN CHINA! - PROTESTS BANNED DUE TO HEALTH PASS!