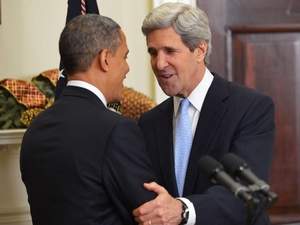 The nomination was approved by a vote of 94 to 3. Senators Ted Cruz and John Cornyn, Republicans of Texas, and Senator James M. Inhofe, Republican of Oklahoma, opposed the nomination. Mr. Kerry voted “present.”

Mr. Kerry, a Massachusetts Democrat who has served in the Senate since 1985, had strong support on both sides of the aisle. Earlier in the day, the Senate Foreign Relations Committee, the panel he has led for the past four years, gave his nomination unanimous approval.

Mr. Kerry, 69, a decorated Vietnam War veteran who was the 2004 Democratic presidential nominee, is the son of a Foreign Service officer. He will succeed Hillary Rodham Clinton, whose last day at the State Department is Friday.

Mr. Obama has also named former Sen. Chuck Hagel, Republican of Nebraska, to succeed Leon E. Panetta as secretay of defense, and John O. Brennan, currently his counterterrorism adviser, as director of the Central Intelligence Agency. Both will face more questions than Mr. Kerry did from senators of both parties when their confirmation hearings are held, though their nominations are expected to be approved. Mr. Hagel’s hearing is scheduled for Thursday, and Mr. Brennan’s for Feb. 7.

Mrs. Clinton, who was participating in a global forum at the State Department, expressed her hope that Mr. Kerry could make headway on the Middle East.

Taking note of the recent Israeli parliamentary elections, in which a centrist coalition made significant gains, Mrs. Clinton said that the shifting political landscape might facilitate progress.

“I actually think that this election opens doors, not nails them shut,” she said. “I know that President Obama, my successor, soon to be Secretary of State John Kerry, will pursue this.”

Study US Foreign Policy By Looking At Oil Reserves: Notes From The Edge Of The Narrative Matrix

Is a Chinese Invasion Coming?

The U.S. Has Killed More Than 20 Million People in 37 "Victim Nations" Since World War II

Death by a Thousand Cuts: Where Is the West's Ukraine Strategy? "Clueless Pentagon and CIA.