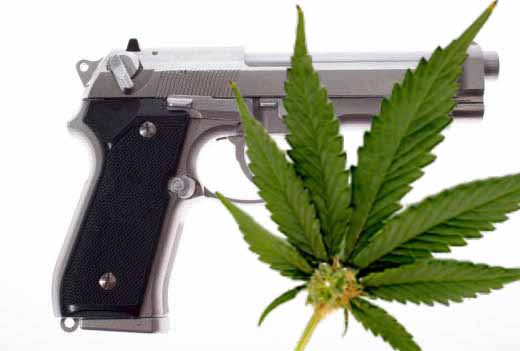 You know that 4473 form?  Yeah, the one that asks about the use of illegal drugs?

Well, what about medical marijuana -- if it's legal in your state?

Guess what -- there appears to be a rather strong presumption at the federal level that this is a disqualification for ownership of firearms!

Ah, Kemosabe, now we see one of the problems with these laws, eh?

This looks like something that is going to severely play hell with people who were foolish enough to believe that their state laws would protect them...... and incidentally, if you bought a gun while having a medical marijuana "prescription" and answered "No" to that question on the 4473, there are those who would argue you committed a federal crime and should be prosecuted for "lying" on that form -- including, it appears, President Obama and Biden!

Most of you folks in those states are "hard blue", yes?

How 'ya gonna feel when the guy you backed for President locks your ass up for 10 years and gives you a permanent felony record on top of it?

The government is your friend..... right?

Ps: Oh oh -- there is an actual BATFE letter on this.  If you have bought a gun while in possession of a "medical marijuana" card (or prescription, whether it comes with a card or not) you are, according to the BATFE, a federal felon and it appears they are going to try to force the states to turn over the lists of those people and may well come after you.