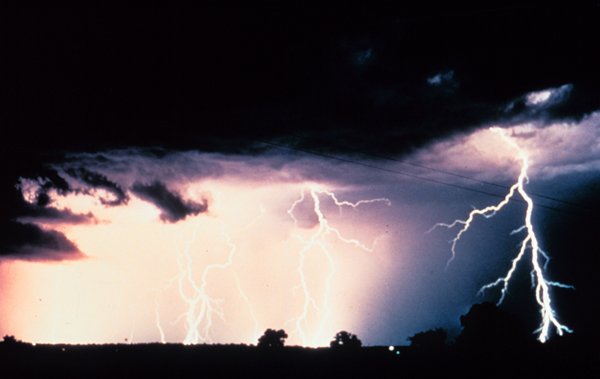 While ejecting from his F-8 Crusader at 47,000 ft (14,325 meters) and at a speed of Mach .82 (624 mph or 1004 km/h), he got caught up in a cumulonimbus tower (basically a dense, vertical cloud, generally found in areas of extreme atmospheric instability and thunderstorms).

Cumulonimbus clouds, which often have something of a mushroom or anvil shape, tend to form in regions where there are extreme updrafts of air, which can form a dense vertical tower of cloud. It’s not uncommon for cumulonimbus clouds to feature thunderstorms, hail, and other severe weather patterns. They can range from a few hundred feet at the base to 75,000 ft. (22,860 m) at the top, though usually they aren’t nearly that tall, with their peaks more typically only reaching around 20,000 ft (6,096 m). The taller the cumulonimbus cloud, the higher amount of updraft that will be experienced.

This is what Col Rankin found himself in as he was forced to eject when his engine suddenly quit and a fire warning light came on. Unable to get the engine restarted, having lost all power, and having difficulty keeping his jet from going into a complete nosedive, he opted for ejecting, despite the extreme altitude and his lack of a pressure suit. He did, however, have an oxygen mask, which had a limited oxygen supply.

Behind the Façade: Abortion Culture Is a Transhumanist Death Cult