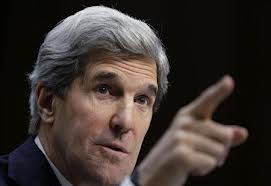 While the possibility of another failure may hang over the White House, Kerry suggested this week that time was running out for a two-state solution with Israel living alongside a sovereign Palestinian state. He said it would be "disastrous" if it did.

When Obama came into power in 2009, he made peace between Israelis and Palestinians a priority, visiting the State Department two days after taking office to announce his choice of former Senator George Mitchell as his special envoy.

Four years later, the president has little to show for it.