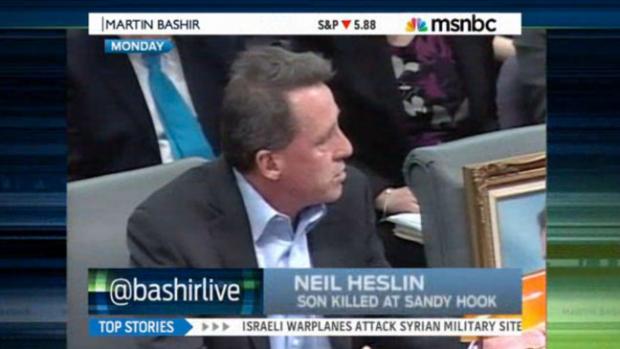 On Monday, MSNBC's Martin Bashir aired a video that seemed to show grief-stricken Neil Heslin being heckled by pro-gun lobbyists as he talked about his 6-year-old son, who was killed in Sandy Hook Elementary School shooting. While making a plea for gun control at a legislative hearing, Heslin at one point he turned to the audience and said: “I ask if there’s anybody in this room that can give me one reason or challenge this question: why anybody in this room needs to have one of these assault-style weapons or military weapons or high-capacity clips.”
When the audience remains silent, Heslin adds, “Not one person can answer that question.” And that’s when a few people recited the Second Amendment in response.
The video that host Martin Bashir aired, though, clipped out Heslin's question and pause in the audience's direction. The resulting edit made it look like boisterous audience members interrupted Heslin's testimony. After the edited video aired, Bashir set up pundits with: “A father’s grief, interrupted by the cries of a heckler. That was the scene today in Hartford, Conn., where the parents of children killed at Sandy Hook Elementary testified before an audience that wasn’t always friendly.”