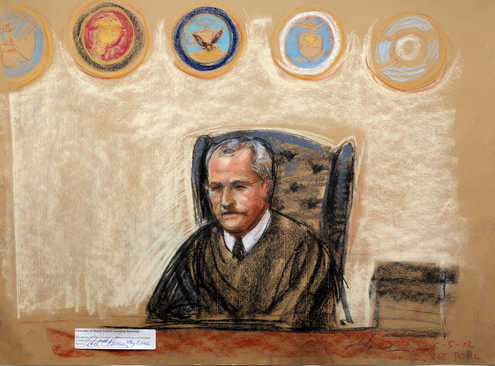 Only a court security officer sitting in court, at the judge’s elbow, has the authority to hit a mute button on the proceedings if there’s a suspicion that national security information could be spilled, Judge James L. Pohl announced.

At issue was a mysterious episode Monday when the sound to spectators was suddenly replaced by white noise in court after 9/11 mastermind Khalid Sheik Mohammed’s attorney David Nevin said the word “secret.”

Nobody inside court did it. The judge erupted in anger, and appeared surprised that “some external body” had the power to prevent the public from listening to the proceedings — which are broadcast in the spectator’s gallery on a 40-second delay.

“This is the last time that will happen,” the judge said Thursday. “No third party can unilaterally cut off the broadcast.”

The court was just beginning to tackle a defense request that the judge issue a protective order on whatever remnants exist of the CIA’s secret overseas prison network. President Barack Obama ordered those facilities closed on taking office.