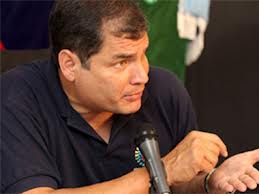 "Crazy person stabs seven AP people while they were waiting for the President. Two have been killed," Correa said in his Twitter account, referring to supporters of the ruling Alianza Pais political movement, known as AP.

In a video shown on local TV networks a man could be seen breaking through a rally of a few hundred pro-government supporters and attacking them with a large knife.

"Before the president was due to arrive ... we can see in these images how this person stabs the people that were standing up front repeatedly," said Interior Minister Jose Serrano at a press conference in Quito.

He said that four people were wounded and that police had arrested the person who they think carried out the attack.