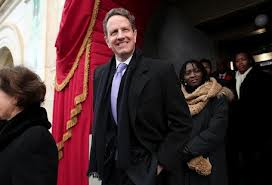 Instead, he was today named a new "Distinguished Fellow" at the Council on Foreign Relations.

What that amounts to exactly and what it pays I couldn't say, in part because CFR currently doesn't seem to have anyone with the title "distinguished fellow," which I think we're supposed to understand to be more senior than "senior fellow." But Geithner will be in residence at CFR with an office, presumably doing some kind of writing. It's striking to me that of all the "insider" accounts of Obama-era economic policy, none seem to have Geithner as a key source or present him as the real hero of the book.