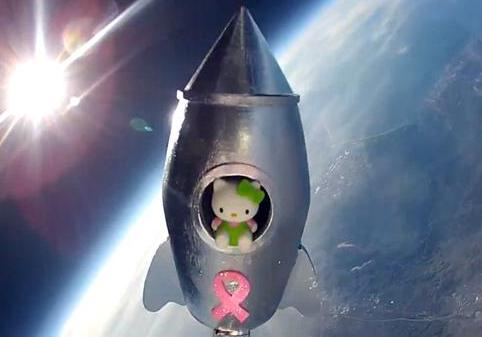 music: We Are Young by: Fun (Feat Janelle Monáe)
We Do Not Own The Rights To This Song
buy at: http://www.amazon.com/Are-Young-feat-...

From Yahoo! News' The Side Show:

Beam me up, Kitty.

Lauren Rojas, a seventh-grader from Antioch, Calif., sent her Hello Kitty doll more than 90,000 feet into space for a science project—and footage of the doll's journey to the final frontier is causing a sensation on the Web.

Lauren, who explained her project to KGO-San Francisco, said she mounted four small cameras to Hello Kitty's pseudo-rocketship and attached a weather balloon. Then she let 'er rip. At around 18 miles, with the cameras rolling, the balloon—reportedly airborne for some 90 minutes—burst into pieces, and the rocket began its slow descent to Earth.

An attached GPS device made it easier to find. Good thing, too. Hello Kitty landed in a 50-foot tree 47 miles away from its launch site. An arborist was called to help retrieve the "rocket" and its astronaut.

Rod Rojas, Lauren's father, spoke to the Contra Costa Times: "It's been terrific how it's sparking all this interest. It's great because seeing all this, I think it's sparked Lauren's interest in science and pushed it that much further."

The supplies weren't cheap. Estimated price for the project: $500. But its success was well worth it. Annette Cluck, Lauren's teacher, said Lauren "just beams with pride when the students praise her or talk to her about it. She could probably talk about it all day long."

SpaceX's Starship launch plan gets an environmental OK from the feds

Why The Prime Directive is Evil