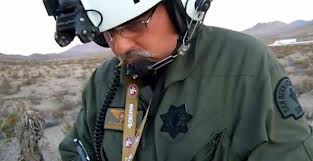 San Bernardino police officer piloting a helicopter was caught on camera circling a lone woman in the desert, before landing the chopper and then proceeding to harass her in a ridiculous example of how police resources are being wasted to shake down innocent people.

The clip begins with the police helicopter making numerous over flights of the woman as she films the chopper.

The helicopter then shines a light in the direction of the woman as it hovers lower and prepares to land. The chopper lands and the pilot, an officer with the San Bernardino Sheriff’s office, approaches the woman and asks her what she is doing.

“Just exploring and picking up rocks,” the woman responds.

The cop then demands the woman’s ID to which she responds she doesn’t have any. When the woman asks why he is questioning her, the cop responds, “We’re investigating something right now.”