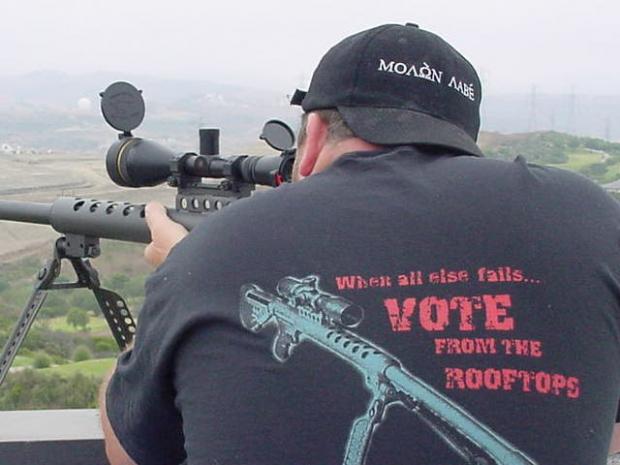 One Facebook page is proclaiming Dorner for president. “We propose electing a man who could no longer sit idly by and watch as malicious tyrants abuse the innocent.”

The description on “We Are All Chris Dorner” chillingly says, “Yes, this is war.”

Nearly 3,000 people like the page “I Support Christopher Jordan Dorner.”

When the Brain Dead Comi Cops stop vans that are not even the right color,and shoot the occupants,no more needs to be said.Cops in America are turning into the most disgusting beings on earth. Someone with an IQ low enough should infiltrate the Academies just to see what they hell they are being feed.America,for what ever reason, is ending up with the most Cops that could not even be imagined.

One, you might want to read Dorner's manifesto (h/t Ed Vallejo) 11 page manifesto:

It opened my eyes.

Two, there is something curious brewing that Martin Hill has done a great job and uncovered in trying to track down the 22 page manifesto immediately reported in the press.  It looks more and more like a fake, and I am the one skeptical of conspiracies:

The Christopher Dorner case has garnered a great deal of attention, particularly because of the Manifesto he allegedly posted on facebook. There are apparently two versions of the manifesto, one being an 11-page version reported on mainstream news sites such as KTLA5 Los Angeles but another which is 22-pages and presents Dormer as an Obama-loving left-wing gun control advocate.
Since the Dorner story is multi-faceted and rapidly developing, not to mention involving rampant police corruption, LibertyFight.com sought to verify the exact origins of this alleged additional manifesto content.

Alternative websites reported the left-wing version of the manifesto in a frenzy, but did not seem to verify any credible original source of the document. Sodahead.com posted a story titled News Media Scrub Cop Murdererï¿½s [Decidedly LIBERAL] Manifesto. An Infowars.com article titled 'Imagine If Christopher Dorner Was a Tea Party Member' refers to Twitchy.com as a source but twitchy itself, as well as sodahead and most all the other sites posting text of the alleged 22 page manifesto all refer to a website called soopermexican.com.

"I've been following closely the news story about Chris Dorner, who is now suspected of murdering three people, including one police officer, and shooting another two police officers. He is targeting police and their families for what he says is a corrupt system that robbed him of his name and his life. You can read all the details here. However, I started noticing that some of the details the media was talking about didn't fit the released manifesto I've read everywhere. Especially interesting, is that KFI's morning news regurgitator Bill Handel had mentioned some pro-Obama comments and anti-NRA sentiments in the manifesto. But these weren't in the copy that KFI themselves released - see for yourself. This video from FOX News Los Angeles reports that the manifesto was 22 pages long, while the manifesto released was only 11. The page where FOX News LA had the manifesto is now deleted. Comments donï¿½t mention the manifesto at all. KTLA also has the abbreviated manifesto, with this parenthetical: ï¿½KTLA has removed the names of a number of officers out of respect for their privacy. FOX News reposted the manifesto, with all the names redacted as the authorities asked, but it still doesn't have the second half. ABC 7 has also posted a redacted half version of the manifesto.

Being curious, I started looking for a complete copy, but other mainstream news media only had the abbreviated copy. However, I was able to find a complete copy of the posting, from the website "Crime File News" - the details in it corroborate with the reading that Bill Handel gave on the KFI morning show today. So why did they edit it? What's the difference between posting 11 rambling pages and 21 rambling pages? Look at what's taken out:

..... UPDATE: News regurgitator Bill Handel is reporting on the KFI radio show that news outlets have been specifically told to post a "redacted" version of the manifesto, in order to protect the names of the police men and women targeted by the murderer - I will replace that portion with police names with the redacted version to protect them. However, it must be noted that the redacted version ALSO doesn't have the Obama and liberal references.

The soopermexican blog relies on three main sources to substanciate the claim that the manifesto is in full a 22 page leftist screed. The first is a Fox news video which mentions that the manifesto was 22 pages, available here. The video was working as of 6:56 PM 2/8/2013.

The 2nd is Bill Handel, a talk-show host on KFI 640 Los Angeles. Although the soopermexican blog oddly doesn't appear to list a date on blog entries, the Handel episodes are presumably from 2/7 and 2/8. The podcast of all Handel's shows on the matter can be found here:

The third source referred to by soopermexican is the website Crimefilenews.com. CrimeFileNews posted an article on Wednesday, February 6 titled Fired LAPD Officer, Obama Lover and Committed Gun Control Advocate is Being Sought In Revenge Killings! which appears to be the actual original version and source of the full text of the 22 page Dorner manifesto.

CrimeFileNews.com links to their twitter account which states "Paul Huebl (@Crimefile) I'm a documentary filmmaker, Investigative journalist, licensed private investigator, actor, who never knows what adventure lies ahead." Crimefile Paul Huebl has 258 followers and 3,605 tweets. Huebl, pictured here, is featured in a 2012 foxcrawl.com article which states that Huebl is a former Chicago policeman turned actor. The article explains that Huebl was featured in the National Enquirer after Whitney Houston's death and reports that Huebl claims that Houston was killed by drug dealers. According to foxcrawl, Huebl reportedly states that he gave the FBI a video from hotel surveillance cameras which is evidence of the allegations surrounding Houston's death.

Huebl has 19 articles archived at LewRockwell.com, the most recent dated January 22, 2013. Some of the articles listed are Shoot, Scoot, and Never Talk to the Cops Paul Huebl on what to do if you must defend yourself or your family, Will You Stand Up and Reject Totalitarianism? What will it take for Americans to get out of this Orwellian nightmare?, and Surviving an American Insurrection Paul Huebl has Doomsday advice.


The 'Dillinger Effect' - those, among others, who have observed or felt the abuses of Law Enforcement, or 'authority' in general, in time begin to find a measure of heroics in someone who stands against them.