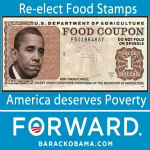 “Now is the time to act boldly and wisely – to not only revive this economy, but to build a new foundation for lasting prosperity,” said Obama during his first joint session address to Congress on Feb. 24, 2009.

Since then, the number of participants enrolled in food stamps, known as the Supplemental Assistance Nutrition Program (SNAP), has risen substantially.

Furthermore, between January 2009 and November 2012 the food stamp program added approximately an average 11,269 recipients per day.