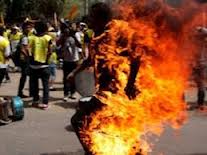 The man died from his wounds in front of the Pôle Emploi agency, Ouest France reported.

Earlier this week, the man sent two emails to local media, warning that he would set himself on fire after finding out that he was no longer eligible for unemployment benefits.

"Today is a big day for me because i am going to self-immolate in front of the employment agency," one of the letters read.

He also said he would use five liters of gasoline to burn himself, according to local daily Presse Ocean.

Local police attempted to contact the man earlier Wednesday morning, but said he did not answer.

"A surveillance was set up today, close to the agency employment center. But this man came from a side street. He was already in flames and out of sight of police," a local officer said.
Philippe Boat from CGT Chômeurs, a branch of the CGT trade union which fights for the rights of unemployed persons, told The Local that France's benefits system is "inhumane" and its rules had caused the man's break down.

'Big rig man' Clarence Thomas gets away from it all