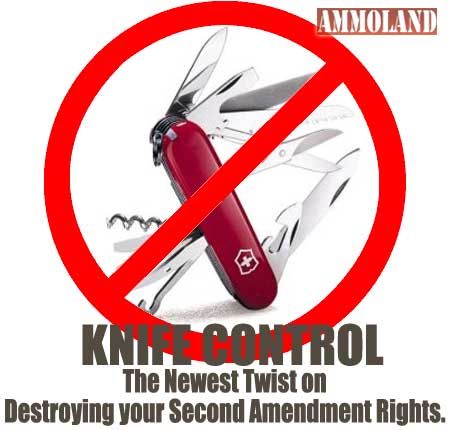 Gilbert, AZ --(Ammoland.com)- A bill [one of 24 anti second amendment bills] working its way very rapidly through the New Jersey legislature has just been amended without a hearing to include “any dangerous knife” to proposed enhanced “weapons free zones,” creating a dangerous trap for the unwary citizen that could result in fines and jail time for possession of common pocket knives or utility knives within those “zones.”

We need EVERYONE to WRITE TODAY to help stop this insanity!

New Jersey Assembly bill A1387 would permit municipalities to establish huge swaths of “weapons free zones” around schools, parks and public facilities within which possession of “any dangerous knife” would be prohibited, under penalty of fine and imprisonment.

There are so many issues with this bill and specifically, the “dangerous knife” provision, I hardly know where to start.

First, there is no definition of “dangerous knife,” a legally vague and ambiguous term that could apply to anything from a Swiss Army Knife to kitchen knives. As such, it will be left entirely up to cops on the street and then courts to determine what is or is not a “dangerous knife.” There is a huge potential for abuse of honest citizens by any cop, prosecutor or judge with an agenda or prejudice, as we have seen amply demonstrated for the last several years in New York City, which stimulated our pending Federal Civil Rights lawsuit against the City and DA. The “dangerous knife” provision was added to the bill after a committee hearing last week from the Assembly floor and without any public hearing on the new provision! We need EVERYONE to WRITE TODAY to help stop this insanity!

The definition of public facilities is extremely broad and simply driving down many streets or walking past a park or through or past a public space would put citizens at risk in a state that has virtually defined unreasonable in regards to similar existing restrictions on firearms. The knife provision puts tradesmen who use knives for their jobs at risk, along with anyone who carries a common folding knife. It would also turn utility knives in hardware or convenience stores into illegal contraband if the stores are within the “weapon free” zones. We need EVERYONE to WRITE TODAY to help stop this insanity!