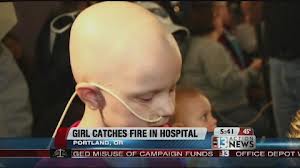 A bizarre fire ignited in a Portland hospital earlier this month, causing second- and third-degree burns in 11-year-old cancer survivor Ireland Lane. A state fire marshal report released Wednesday suggests that the blaze was started, in part, by something many of us use every day: hand sanitizer.

Is it time to toss the Purell?

In a word, no. With the Lane tragedy, an inauspicious mix of hand sanitizer, static electricity, and olive oil was to blame, the report says. Though similar incidents have been recorded--in hospital settings no less--it is highly unlikely you’ll set off a fire the next time you slap on some hand sanitizer and go dragging your feet across a carpet. In any case, hand sanitizer has far more benefits than risks.

Here's what allegedly happened to Lane: In a room in Doernbecher Children’s Hospital, Lane used olive oil to remove glue used during an EEG test from her scalp. EEGs are common procedures for understanding electrical activity in the brain, and olive oil is commonly used to remove the EEG glue--especially when patients are allergic to the compound traditionally used to break down EEG glue.

"We Own the Science and the World Should Know it"