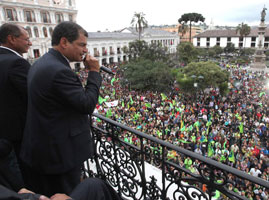 With 70% of the ballots counted, reports indicated that Correa received approximately 57% of the vote, almost 40 percentage points more than his closest rival, banker Guillermo Lasso.

According to the digital daily El Ciudadano, Lucio Gutiérrez, the Sociedad Patriótica candidate, received 6.6%, while Mauricio Rodas, from SUMA garnered 4%.

After a television interview, President Rafael Correa departed from his Carondelet residence and headed for the now-traditional Shyris tribunal, where thousands of supporters celebrated his re-election to office with a mandate from the majority of Ecuadorans. "We accept this great support as a great responsibility," he said in a moving speech.