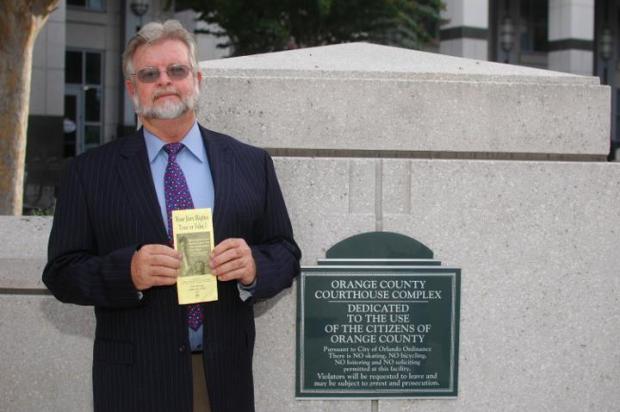 February 25, 2013; Orlando, FL.  Friends, colleagues, and supporters of Mark E. Schmidter will hold a rally today at 5:00 P.M. at the Orange County Courthouse in protest of Schmidter’s imprisonment for distributing fliers promoting what is known as “jury nullification” in July 2011.  Supporters have formed a group called “We Are Mark Schmidter” which is available on social media sites such as Facebook.  Schmidter was convicted of contempt of court and sentenced on Thursday after a state appellate court upheld the constitutionality of Judge Belvin Perry’s administrative order prohibiting the distribution of materials to prospective jurors.

Adam H. Sudbury, Esquire, Schmidter’s attorney, will be present at the courthouse from 4:30 P.M. to 5:15 P.M. to answer any questions related to the legal proceedings.  Schmidter has asked the appeals court to release him pending further review on appeal by the Florida Supreme Court and, if necessary, the United States Supreme Court.  Schmidter has also sued Perry in federal court seeking to invalidate the administrative order.

Questions about this release should be directed to: SUDBURY LAW, 407-395-4111 or adam@sudburylaw.net

The most recent confinement occurred per an arbitrary rule a man wrote, judged, denied jury for, sentenced under, was since found illegal by a higher court and even repealed himself due to that order.

This begs the question, since that rule has been found illegal, who is the real criminal under their actions today?

Mr. Schmidter is a purely peaceful activist who believes in the historically well established rights of juries to judge the law as well as the facts and also that if there is no victim, there is no crime and jurors may agree.

Please support him and the #MarkSchmiderCampaign effort. We will write letters to the State Judicial Review, all media we can think of, and not let this story die. If a 64 y/o Vietnam veteran can be thrown in jail for passing out leaflets with an opinion that is different than the status quo, then, We are All Mark Schmidter.