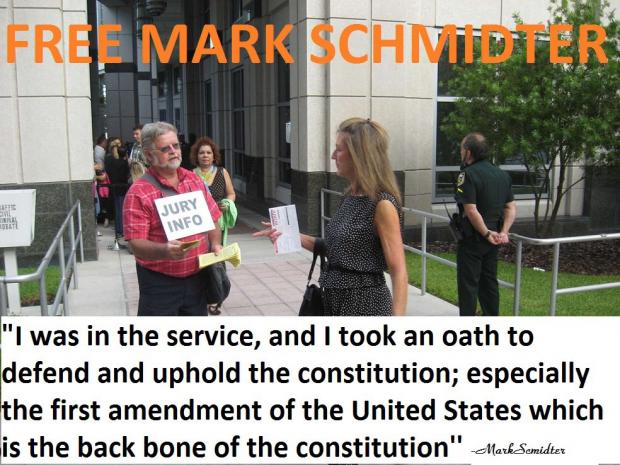 Mark E. Schmidter is an activist for jury rights whose story we covered one year ago. He was originally facing a year in jail after being found guilty of two felonies: External Criminal Contempt of Court, and jury tampering, for distributing information outside the Orange County Courthouse in Florida.

We noted that Schmidter was not guilty of any actual law, but rather rules written by the acting judge. These rules that Schmidter is in violation of are for demonstrating outside of a "free speech zone" determined by Judge Perry. Schmidter, who was first arrested in June 2011, has maintained his innocence and that the judge's orders he violated were a direct violation of the First Amendment of the Constitution.

Furthermore, the very rule he was found to be in violation of has been overturned.

Judge Belvin Perry issued Administrative Order # 2011 03 which states that if anyone hands out information, talks or hold a sign outside the courthouse, they would be held in contempt of court and jury tampering.

Administrative Order #2011 07 states that anything that has to do with “Free Speech” may only be done in the free speech zones which are two 10’x30’ remote areas nearly a football field away from the courthouse doors. It is the same rule that was used to jail another jury nullification activist, Julian Heicklen.

If jury nullification advocates can get to jury trial on the jury nullification issue, so that they have the right to explain to their jury that it is the jury who makes the guilty/not guilty decision as part of their defense, we might get some court cases strengthening jury nullification. This could ultimately lead to repeal of all kinds of unlawful laws, like the drug war laws.

5 Words Used to Control and Enslave You

Localization: An Alternative to the New Normal