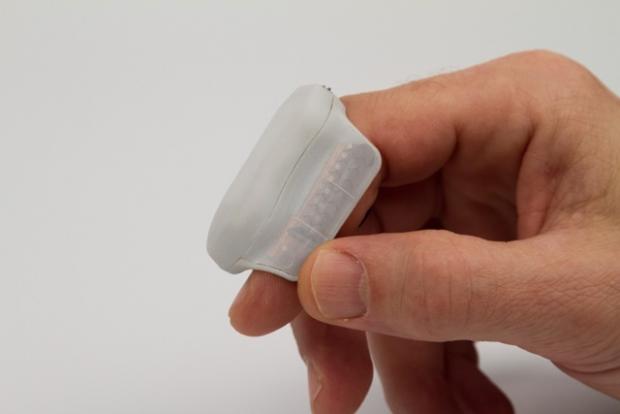 It’s more than just an alternative to the optical mouse, though. Mycestro is a user interface tool that enables gesture control without the arm-fatigue issues of Minority Report-style motion tracking. It changes how you interact with your desktop and, by offering new ways to control them, could even change how those desktops are designed in the first place.

Built to slip on an index finger and track the wearer’s movements, the Mycestro allows the wearer to move the cursor without reaching for a mouse, and joins a growing cohort of wearable devices, says creator Nick Mastandrea.

“It’s a well-rounded device,” he says. “It’s actually a little bit on the simplistic side. But the application, how we’re using it and how you can interface to it, is all transitioning towards the new, evolved, high-tech person.”
A user wearing Mycestro touches her thumb to it to engage the cursor, taps her finger to click, and slides her thumb along the device to scroll. Mycestro uses a gyroscope to track positioning in 3-D space, translating that to the 2-D screen via the integrated app, and registers other functions, like tap-to-click, via a built-in accelerometer. Data from the accelerometer also helps correct the gyroscope, improving precision control, and the whole system is coordinated by Bluetooth low energy.