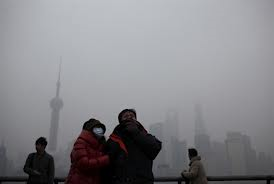 We first wrote about the relentless exports of Beijing’s toxic smog, which has been migrating in an eastern direction, over the East China Asia, and parking right over downtown Tokyo, nearly a month ago, but only now has Japan formally responded to what can only be classified as Chinese atmospheric sabotage. According to Japan Times, “Authorities will urge residents to stay indoors if the level of toxic
smog spreading to Japan from China is expected to exceed twice the maximum limit set by the central government, officials said.” And with Chinese smog overnight already literally off the charts virtually every day, as seen most recently here…

… one wonders just what is this great economic reflationary miracle Japan intends on conducting, with everyone ordered to stay indoors or better yet, not breathe? The good news, is that as explained previously, China’s inbound toxic air should promptly fix Japan’s untenable “top-heavy” demographic situation.