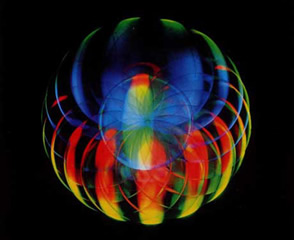 Holography is a technique which enables three-dimensional images to be made. It involves the use of a laser, interference, diffraction, light intensity recording and suitable illumination of the recording. The image changes as the position and orientation of the viewing system changes in exactly the same way as if the object were still present, thus making the image appear three-dimensional.

The holographic recording itself is not an image; it consists of an apparently random structure of either varying intensity, density or profile.

The Hungarian-British physicist Dennis Gabor (in Hungarian: Gábor Dénes),[1][2] was awarded the Nobel Prize in Physics in 1971 "for his invention and development of the holographic method".[3] His work, done in the late 1940s, built on pioneering work in the field of X-ray microscopy by other scientists including Mieczysław Wolfke in 1920 and WL Bragg in 1939.[4] The discovery was an unexpected result of research into improving electron microscopes at the British Thomson-Houston Company in Rugby, England, and the company filed a patent in December 1947 (patent GB685286). The technique as originally invented is still used in electron microscopy, where it is known as electron holography, but optical holography did not really advance until the development of the laser in 1960. The word holography comes from the Greek words ὅλος (hólos; "whole") and γραφή (grafē; "writing" or "drawing"). The development of the laser enabled the first practical optical holograms that recorded 3D objects to be made in 1962 by Yuri Denisyuk in the Soviet Union[5] and by Emmett Leith and Juris Upatnieks at the University of Michigan, USA.[6] Early holograms used silver halide photographic emulsions as the recording medium. They were not very efficient as the grating produced absorbed much of the incident light. Various methods of converting the variation in transmission to a variation in refractive index (known as "bleaching") were developed which enabled much more efficient holograms to be produced.[7][8][9]

Several types of holograms can be made. Transmission holograms, such as those produced by Leith and Upatnieks, are viewed by shining laser light through them and looking at the reconstructed image from the side of the hologram opposite the source.[10] A later refinement, the "rainbow transmission" hologram, allows more convenient illumination by white light rather than by lasers.[11] Rainbow holograms are commonly used for security and authentication, for example, on credit cards and product packaging.[12]

Another kind of common hologram, the reflection or Denisyuk hologram, can also be viewed using a white-light illumination source on the same side of the hologram as the viewer and is the type of hologram normally seen in holographic displays. They are also capable of multicolour-image reproduction.[13]

Specular holography is a related technique for making three-dimensional images by controlling the motion of specularities on a two-dimensional surface.[14] It works by reflectively or refractively manipulating bundles of light rays, whereas Gabor-style holography works by diffractively reconstructing wavefronts.

Most holograms produced are of static objects but systems for displaying changing scenes on a holographic volumetric display are now being developed.[15][16][17]

Holograms can also be used to store, retrieve, and process information optically.[18]

In its early days, holography required high-power expensive lasers, but nowadays, mass-produced low-cost semi-conductor or diode lasers, such as those found in millions of DVD recorders and used in other common applications, can be used to make holograms and have made holography much more accessible to low-budget researchers, artists and dedicated hobbyists.

It was thought that it would be possible to use X-rays to make holograms of molecules and view them using visible light. However, X-ray holograms have not been created to date.[19] Close-up photograph of a hologram's surface. The object in the hologram is a toy van. It is no more possible to discern the subject of a hologram from this pattern than it is to identify what music has been recorded by looking at a CD surface. Note that the hologram is described by the speckle pattern, rather than the "wavy" line pattern.

Holography is a technique that enables a light field, which is generally the product of a light source scattered off objects, to be recorded and later reconstructed when the original light field is no longer present, due to the absence of the original objects.[20] Holography can be thought of as somewhat similar to sound recording, whereby a sound field created by vibrating matter like musical instruments or vocal cords, is encoded in such a way that it can be reproduced later, without the presence of the original vibrating matter.

Holograms are recorded using a flash of light that illuminates a scene and then imprints on a recording medium, much in the way a photograph is recorded. In addition, however, part of the light beam must be shone directly onto the recording medium - this second light beam is known as the reference beam. A hologram requires a laser as the sole light source. Lasers can be precisely controlled and have a fixed wavelength, unlike sunlight or light from conventional sources, which contain many different wavelengths. To prevent external light from interfering, holograms are usually taken in darkness, or in low level light of a different colour from the laser light used in making the hologram.

Holography requires a specific exposure time (just like photography), which can be controlled using a shutter, or by electronically timing the laser