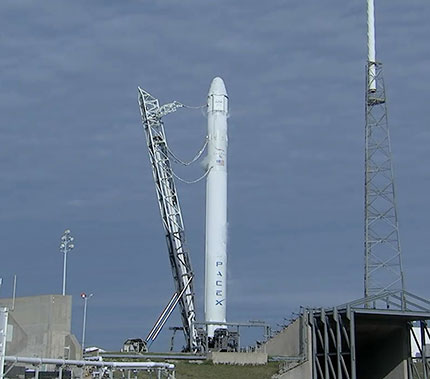 Hawthorne-based SpaceX’s Falcon 9 rocket is on the launch pad ready to blast off at 7:10 a.m. Pacific time from Cape Canaveral, Fla., to begin a resupply mission to the International Space Station for NASA.

If you want to watch the launch, check it out on NASA TV or SpaceX's webcast. Coverage begins at 5:30 a.m.

NASA said the weather forecast is 80% favorable for a launch.

"We're about to launch and we're happy to be here," Mike Suffredini, NASA program manager for space station at Johnson Space Center, said at a pre-launch press conference. "Quite a bit of work has been done by the SpaceX and ISS teams to get here. We've spent a few weeks getting the station ready."

During the mission, SpaceX’s Dragon capsule is set to be packed with more than 1,200 pounds of scientific experiments and cargo for the astronauts aboard the space station. It will remain attached to the orbiting outpost for more than three weeks and return with more than 2,300 pounds of cargo.

The company, formally known as Space Exploration Technologies Corp., performed a successful resupply mission to the space station in October and a demonstration mission in May.