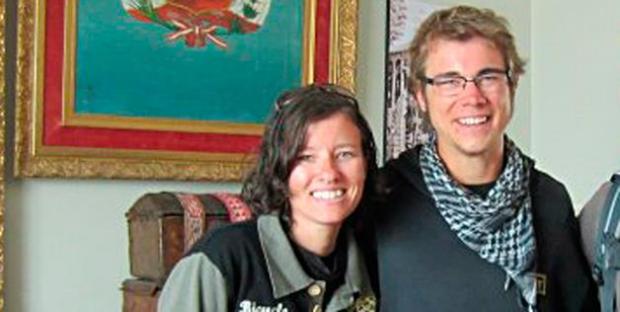 Sometimes moms do cool things like drive you to the mall and let you borrow/keep forever $20. Mostly, though, they are embarrassing.

In November, 25-year-old Garrett Hand and his 25-year-old girlfriend Jamie Neal flew from their California home to South America for a four-month bike trip. Before the couple left, they informed their friends and family that, for some of their trip (as they traveled through jungles and rainforests), they would be out of cellphone and Internet range.

In January, they passed out of cellphone range. In February, Garrett's mom demanded the Peruvian government launch a full-scale search for the couple, whom she believed to be missing.

What they actually were, was "having a blast."

The couple's last communication with their families (and access to their bank accounts) occurred on January 25. In late February, Garrett's mom called Peru and demanded they put Garrett on the phone to talk to her right this instant, or else they'd be in big trouble, mister.

Forgiving a Father Who Left

Why Fathers Are Essential To Educating Children

Liberals Are STERILIZING Themselves And Removing Themselves From The Gene Pool

ANOTHER new scandal on the way for 'Biden Crime Family'